Double Rainbow by Hacksaw Gaming is a 7-reel Cluster Pays slot. Stakes range from £0.10 to £20 per spin in this medium volatility slot. Bonus features in the Double Rainbow slot include Multipliers and Cascading Wins. Play the 96.38% RTP slot online at Wizard Slots.

Hacksaw Gaming is the real money slot games online developer behind the Double Rainbow slot. It’s a 7-reel, 6-row slot with Cluster Pays and a colourful candy theme. Playable from minimum stakes of £0.10 per spin, you can access the game on all mobile devices.

Double Rainbow has a few bonus features that centre on multipliers. For example, you could trigger multipliers of up to 250x. In addition, the Cascading Wins feature is available.

If you’re a fan of the Fluffy Favourites slots series, then you may want to check out the Double Rainbow slot. It has the same appealing charm as Fluffy Favourites and is equally entertaining. Log in to Wizard Slots to play online slots like this colourful slot from Hacksaw Gaming online.

How To Play Double Rainbow

Click the Up & Down arrows towards the right to set your preferred bet.

Then, use the Spin icon to start the game.

Winning combinations in Double Rainbow occur when 5 or more matching symbols land anywhere on the grid in a cluster - they must be touching vertically or horizontally. The lightning bolt wild symbol can replace regular symbols to help complete a winning line, but it cannot substitute for the cloud symbols.

When winning combinations land, the winning symbols disappear from the reels, and new ones drop in to take their place.

The other special symbols include the cloud and the double rainbow cloud. 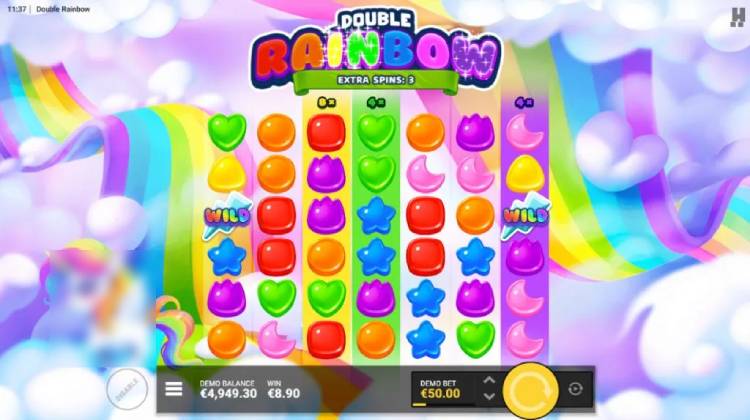 Rainbow Reels feature: There are 7 reels available, each for one of the colours of the rainbow. So, these Rainbow Reels have Reel Multipliers applicable to successful wins on the specific reels. In addition, a cloud symbol lands on the reel and makes a Rainbow Reel come to life.

Multiplier Clouds: When cloud symbols land on the reels, they will show a multiplier value. This multiplier is added to the Reel Multiplier of the reel it landed on.

Normal Clouds: Normal clouds can land on the reels and trigger the Reel Multiplier. It then adds one of the following multiplier values to the Reel Multiplier: 2x, 3x, 4x, 5x, 10x, 25x, 50x, 100x, or 250x. You also win 1 additional spin where all the currently activated Rainbow Reels remain active.

Double Rainbow Clouds: This bonus round works similarly to the normal cloud. You can add the same multiplier values to the active Reel Multipliers and win 3 additional spins. All the active Rainbow Reels remain so during the 3 extra spins.

Full Rainbow feature: You can trigger this feature when you activate all the Rainbow Reels simultaneously. If you manage this, all Reel Multipliers are further multiplied by one of the following values: 2x, 3x, 4x, 5x, or 10x. You also receive 5 more spins with all activated Rainbow Reels remaining active. 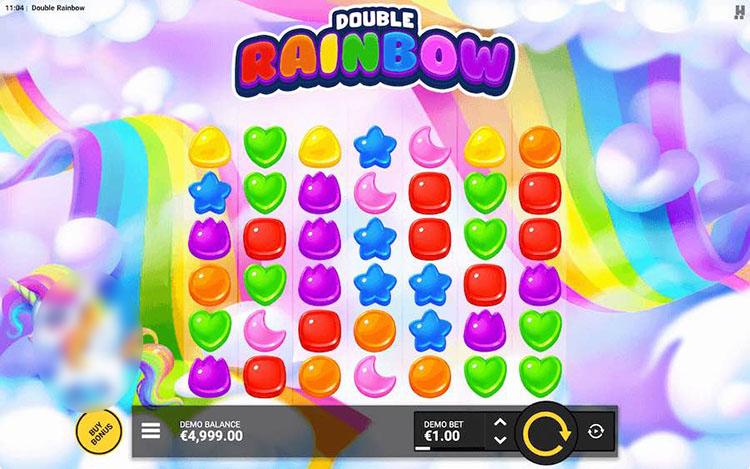 The Double Rainbow slot theme caters to players who enjoy lots of colour in their games. It centres on rainbows & unicorns. The bright and cheerful action occurs against a soft rainbow in the clouds.

A wide-eyed unicorn lies to the left, while the symbols appear on a transparent grid. The symbols you will encounter include; a red square, orange circle, yellow triangle, green heart, blue star, pink moon, and purple flower. All the symbols can pay up to 50x your stake for a cluster of 15 or more.

A funky soundtrack plays in the background as you spin the reels. Often the volume turns up as you land winning spins. 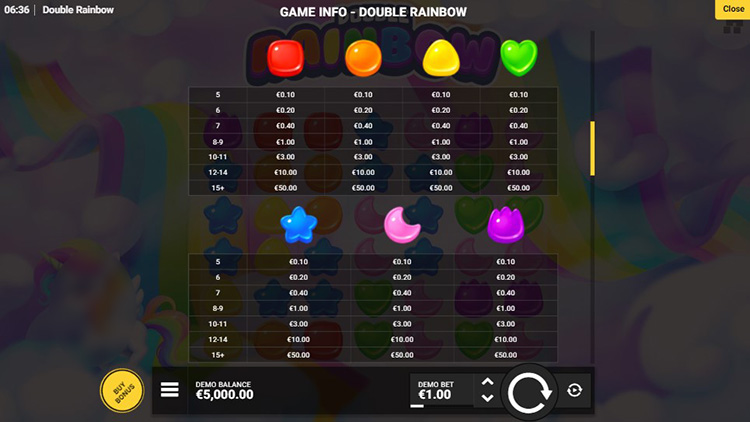 You rarely come across a gentle giant like the Double Rainbow slot, so this was a nice surprise from Hacksaw Gaming. We love the use of bright colours because they immediately catch your eye. The funky tune completes the colourful theme and sets you up for some lively gameplay.

Most of the bonus rounds here focus on multipliers. For example, through the Rainbow Reels bonus, we learn that each reel has its own multiplier. So, landing a win could trigger the specific multiplier. In addition, the Normal Clouds bonus could land you multipliers of up to 250x.

As you can see, this is not your ordinary colourful slot. The base game may start tame, but the action can take a turn if the bonus rounds kick in.

See for yourself when you log in to play the Double Rainbow slot online at Wizard Slots.

What is the RTP of Double Rainbow?

Can you play Double Rainbow on a mobile phone?

Yes, the Double Rainbow slot works on all smartphones that support HTML5 software.

Does Double Rainbow have a free spins feature?

Double Rainbow doesn’t have a Free Spins round. However, you can trigger extra spins through the Multiplier clouds and Full Rainbow feature.

What’s the volatility of Double Rainbow?

Can you play Double Rainbow for real money?

Yes, you can play the Double Rainbow slot for real money right here at Wizard Slots for a max bet of £20.