If you’re on the hunt for adventure Hot Safari slots online takes you deep into the wild of the Serengeti with thrills that aren’t just a mirage.

Spin the reels beneath the scorching desert sun to see what majestic wildlife will come along your path to reward you with riches of the land, from meerkats to zebras and even rhinos. Make sure you stay alert because the king of the land is out there ready to pounce. And the animals aren’t the only things that are wild in this game and if you are lucky to discover them you could make it rain down in Africa.

The illumination of the reel is created from the bright sunlight, which casts a bright orange glow over the game screen. Consequently, the final layout is simply stunning as the minimalistic approach removes other background details drawing attention to the game itself. Furthermore, the Hot Safari games include a lifelike nature sounds and a tribal soundtrack which completely immerses you into the theme of the slots online game.

Player of the game benefit from easy gameplay, with an uncluttered command bar located at the bottom of the game screen, right below the reels. The likelihood of winning is only accelerated by the 25 fixed paylines running across the screen which awards cash prizes. So, if you are ready to embark on the trip of a lifetime, go wild with Hot Safari.

Sneak Peak into Pragmatic Play - the Developers of this Slot Online

Pragmatic Play is another fresh face to the online gaming industry, formed in 2015 the company was quick to push the boundaries in relation to online gaming slots. The 100+ team at Pragmatic Play is a well-oiled slot game making machine, which is known for producing reliability and efficiency for slot players. The team is well-regarded as one of the best gaming specialists, through consistent incremental improvements of their slot games. Siliema based headquarters within the island of Malta is no stranger to producing the highest standard of customer focus slot games. The growing competition within the market has only inspired Pragmatic Play further, resulting in their rightful place as an award-winning game studio.

Furthermore, the company was so close to securing further success at the EGR Operator Awards. In consecutive years, 2016 and 2017, Pragmatic Play was shortlisted for Game of the Year, for Hot Safari and Queen of Gold respectively, but couldn't secure the high-status prize. Some of the games that Pragmatic play is best renowned for include: 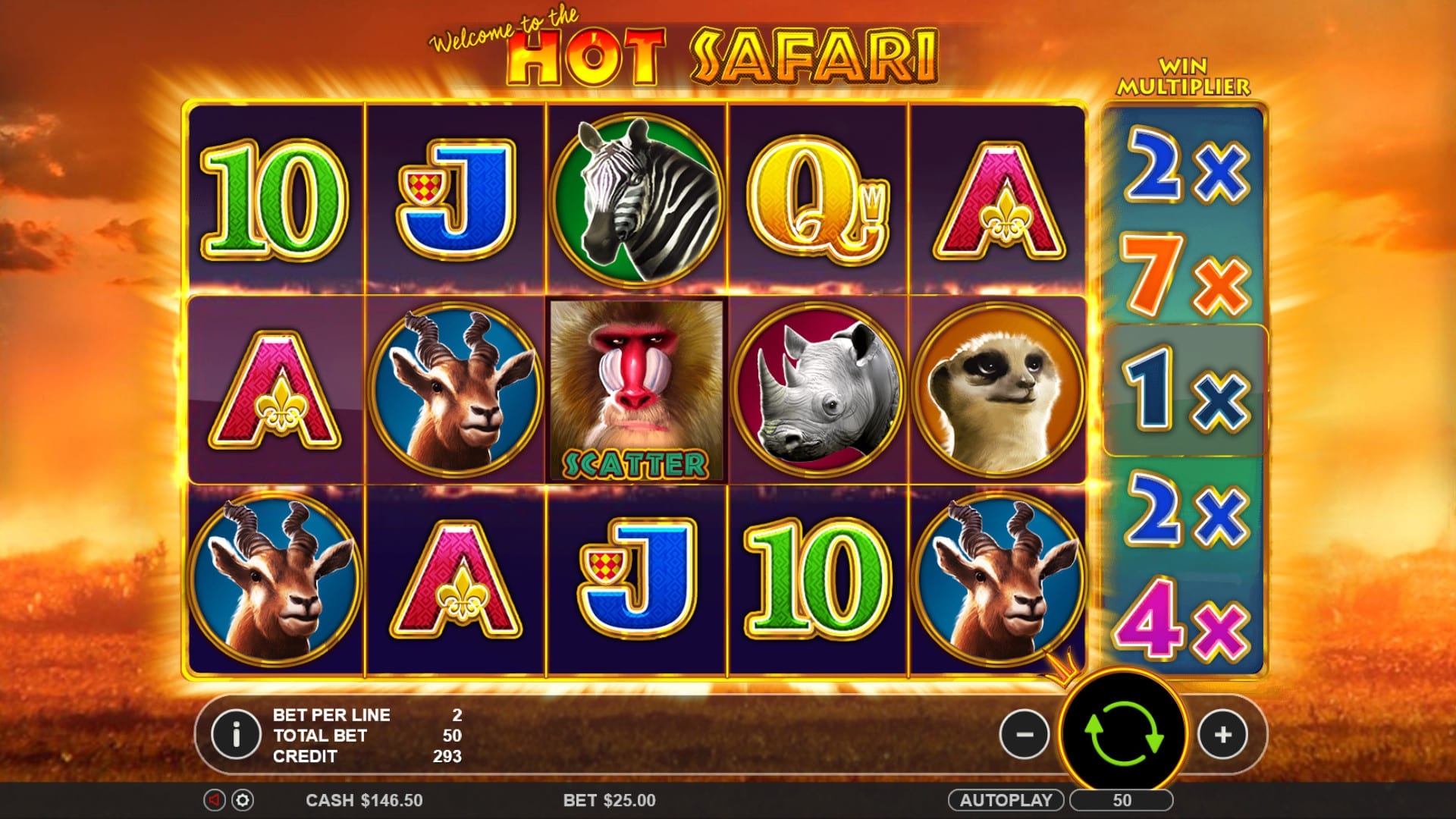 This wild and wonderful 5 reel slot game has 3 rows and 25 fixed paylines with the addition to add an extra reel will have you hunting for the big game, and even bigger wins. If your ready to go on this exhilarating safari that could bring you momentous wins then read on to discover more about this slot.

Before you start to decide if you want to adjust the size of your wager before hitting play to get the hunt started. The bigger the wager, the bigger the wins so if you want to take down the big game consider this. Don't forget to read our guide to help you pick the best slots to play for new players.

The first group of low pay-out groups symbols consists of the number 10, Jack, Queen, King and Ace appear frequently on the game screen to give you more chances to win several times over with them. The animal symbols have increased value which increases interest as opens up the chance to meet a Meerkat, an Antelope, a Zebra, a Rhino and a mighty Elephant. Hot Safari has simple gameplay that makes room for the bigger prizes and the stunning visuals. 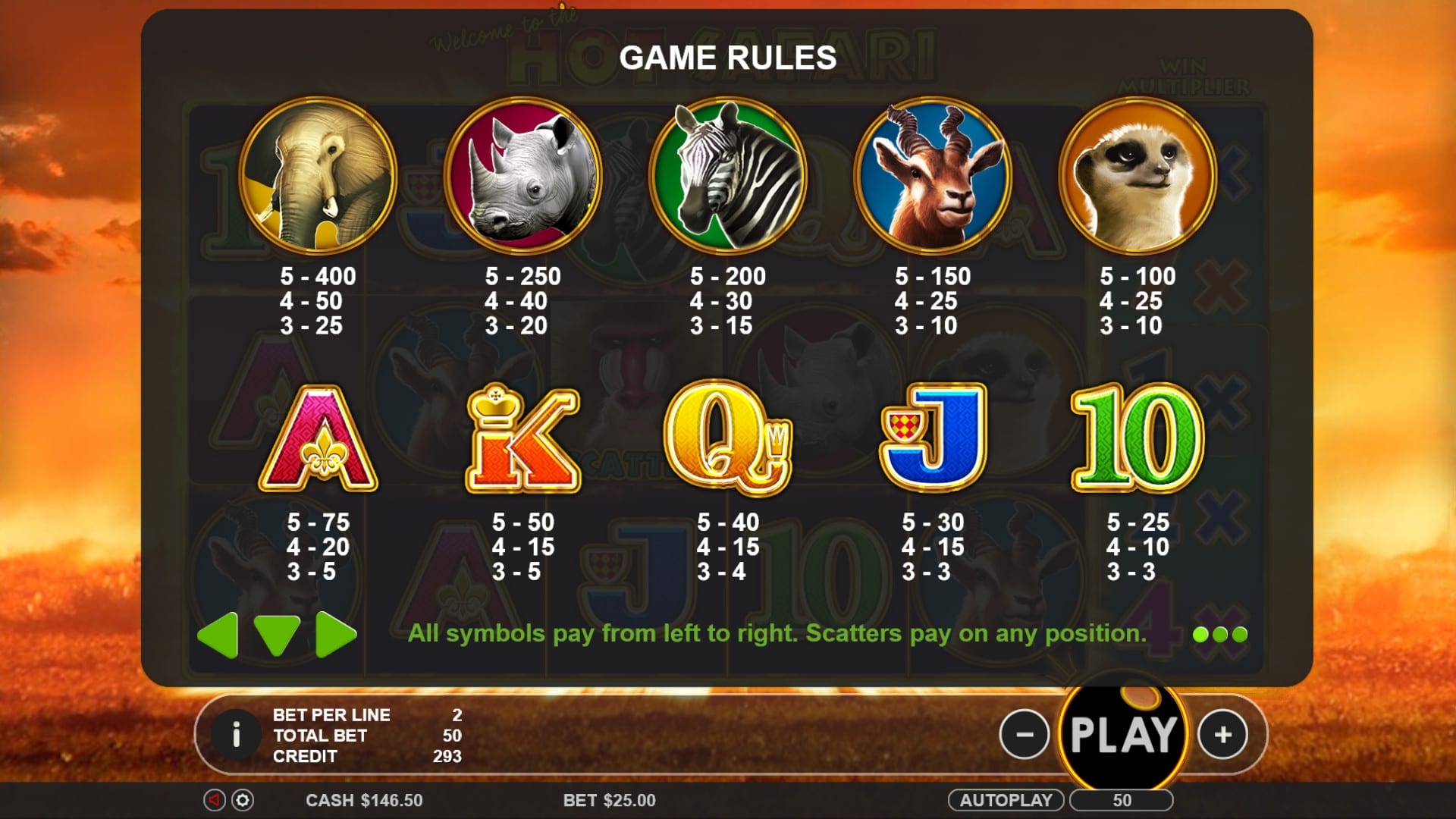 The Verdict on Hot Safari Slot

Hot Safari is an epic adventure into an immersive world of exotic wildlife in the African Savanna, so if you are a fan of exciting and stimulating gameplay then Hot Safari is an experience you aren’t going to want to miss. With additional features, fabulous prizes and gorgeous visuals, watch the animals come to life in this unforgettable video slot game. If you are on the hunt for games that take you to exotic lands far away, why not try out New Tales of Egypt and Crazy Jungle from Pragmatic. If you enjoyed Hot Safari why not try Claws vs Paws.