Krazy Klimber free slots from Reflex Gaming takes a lot of inspiration from the 80s. With the retro visuals and arcade game feel, this slot game is one for the ages.

The max win in this crazy game is fixed at 3902x the player’s stake, which can be set anywhere between 20p and £100 per spin while the variance is medium. Look past the gaming aspect, and you will find a fun casino game packed full of surprises. Krazy Klimber lets players ascend a skyscraper in the Climb Feature. How crazy is that?

As mentioned above, the graphics in Krazy Klimber try to mimic a retro arcade game with varying degrees of success. Yes, it does look like a videogame designed in the 80s, but nowadays, that nostalgia might be lost on some people. Instead, Krazy Klimber’s graphics may come across as dated to some modern slot players.

Thematically, the slot mirrors the climax of King Kong. The central character is a large ape trying to climb the empire state building. The symbols on the five reels are made up of:

The developer behind this slot game is a company called Reflex Gaming. They have created tons of slots ready to play on mobile and desktop, such as: 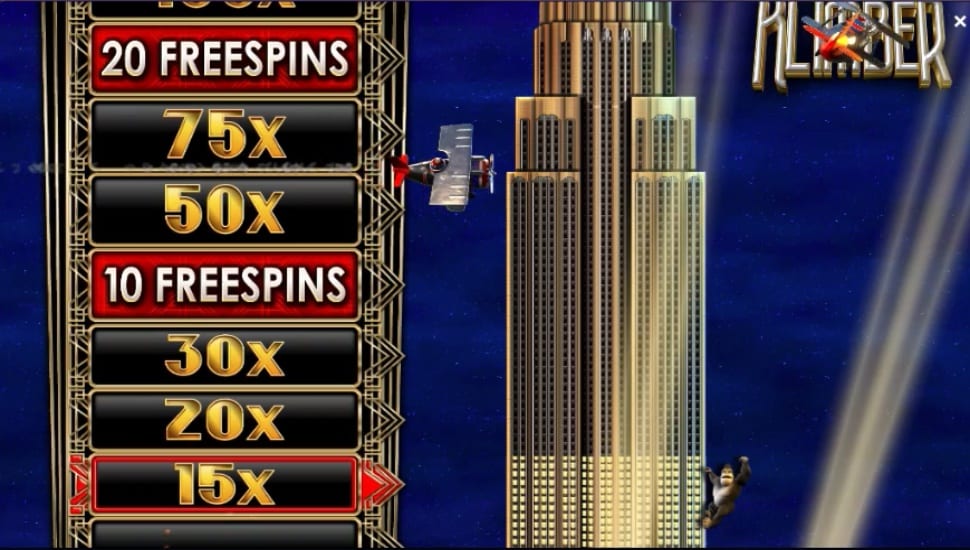 Anyone curious about the Krazy Klimber slot game will be pleased to know that they can play it right here on Wizard Slots. First, though, you will need to register an account. The sign-up process is very quick and requires you to:

The best part is that players who deposit £10 on sign-up can participate in our welcome offer and spin the Mega Reel. The Mega Reel has some great prizes available, including amazon vouchers or up to 500 free spins to use on Starburst or Fluffy Favourites (Full Ts & Cs Apply).

Krazy Klimber has a simple concept. The player must spin the reels and try to match three or more identical symbols across a pay line. To do this, you must first place a wager between 20p and £100 for one spin. The animation will play, and a multiplication of your stake can be won if you are successful. This multiplier will vary depending on how many symbols are in the pay line and the type of symbol.

The Krazy Klimber slot game may have a ridiculous premise, but its stats are more in line with what you would expect from a 5x3 slot game such as this.

Variance in this game is medium. Medium variance slots are difficult to judge as the pay lines form regularly enough to warrant interest, but their symbol values can range from the lowest point to the highest. With an RTP rate of 94.09%, Krazy Klimber is lower than the average for an online slot in 2021. If a player deposits £100 throughout a game, this percentage informs us that they are likely to receive back £94.09 in return on average.

Discover more about Krazy Klimber from the table below.

The bread and butter of the Krazy Klimber slot game are its bonus features, more specifically its Climb Feature.

As you can see, the main function in the Krazy Klimber slot game is the Climb Feature. All other bonuses stem from here, but it is a bit of a shame that the player has no control over the ape.

The Krazy Klimber slot game is a product of its Climb Feature. The theme and main draw of this game are centred on this feature. If you do not like this random bonus, chances are you won’t like the rest of the game.

There is always room for alternative opinions, so go and form your own by playing Krazy Klimber at Wizard slot now. And once you’ve done that, why not try the Joe Exotic slot too?