Legend of the Jaguar

Legend of the Jaguar by Sunfox Games & Playtech is a 5-reel and 243-ways-to-win slot game with a 96% RTP rate, with stakes ranging from £0.25 to £100 per spin on every mobile device. Bonus features in this medium to high volatility jungle adventure theme include; Re-spins, Multipliers, and Free Games.

Legend of the Jaguar Slot Review

Playtech and Sunfox Games launched their Legend of the Jaguar slot in 2018. The 5-reel, 3-row, and 243-ways-to-win slot has an Aztec jungle adventure theme. Playable from minimum stakes of £0.25 per spin, the game is available on all mobile devices.

Bonus features in Legend of the Jaguar include; Re-spins, Multipliers of up to 5x, and Free Games. For example, you can choose among 3 Free Games features. In addition, all of them have different variance ratings.

Ever the innovator, Playtech has a range of slots to play online, available at Wizard Slots casino. Unfortunately, the Legend of the Jaguar slot is currently unavailable on Wizard Slots.

How To Play Legend of the Jaguar

Use the + and - Coin Value keys in the middle to set your bet value.

Click the Spin icon on the right to start playing.

Other special symbols include the Free Games scatter and the jaguar symbol. 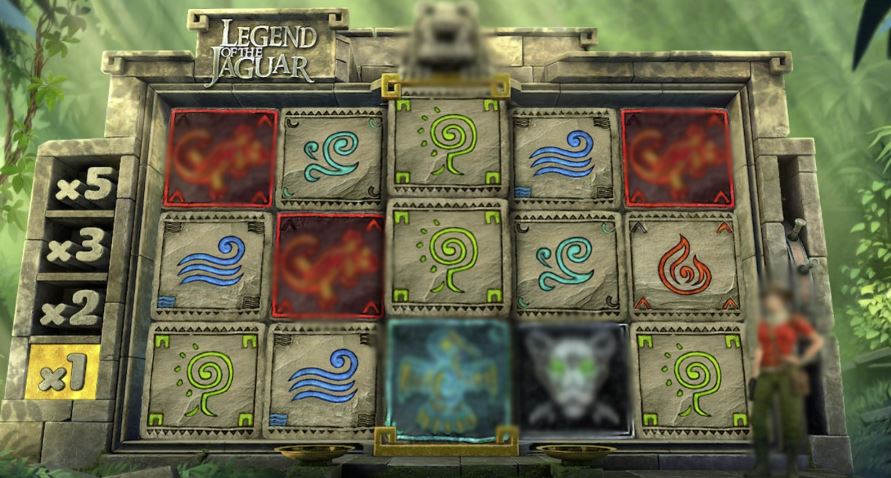 Win Cascades and Multipliers feature: If a winning combination lands, the winning symbols disappear from the reels, and new symbols fill their empty positions. If you encounter a new cascade, you trigger your first 1x multiplier. In addition, the multipliers increase after consecutive cascades. For example, the win multiplier starts at 1x, to 2x, 3x, and then 5x.

Jaguar Re-spins feature: Land the Jaguar symbol on the 3rd reel to trigger the feature. Afterwards, the Jaguar symbol transforms into an expanded locked wild while the other reels re-spin. The re-spins keep going until you can’t land a winning combination or until the Free Games start. Consecutive winning spins with the Jaguar wild locked in position increase the win multiplier value to 5x.

Free Games feature: You can trigger the bonus via Free Games scatter symbols on the odd-numbered reels. There are 3 different Free Games features available. They differ across variance, the number of spins, and the multiplier value. The casting mould indicates the different options;

Legend of the Jaguar RTP & Volatility

Legend of the Jaguar starts with a cinematic intro that gives us an idea of what the jungle adventure has in store. Its design looks similar to other adventure uk slot games, but there is a female explorer. The action occurs in the middle of an eerie jungle. We can see the leaves flowing smoothly in the background.

Symbols appear against a stone grid. According to the storyline, this is an ancient temple occupied by a mysterious presence. Some animals appear on the reels like; fish, boars, jaguars, lizards, and birds. There are also fire, air, and water elements, which pay lower values.

A gentle drum-heavy soundtrack plays as you spin the reels. In addition, you can hear the symbols spinning. However, the best part is hearing the female character next to the reels sigh and cheer you on as you play.

Legend of the Jaguar Review Summary

Legend of the Jaguar injects freshness into the adventure slot game genre. It looks like the popular Gonzo’s Quest slot, but the game has a female explorer as the main character. Also, Sunfox Games showcases its knack for high-quality animation, like the moving tree leaves in the back.

The bonus features also help round out the engaging gameplay. Our favourite could be the Free Games round because we like the freedom to choose your variance. You also get different multiplier perks for each variance.

This is one of the best jungle adventure slot games thus far, offering more than many others out there.

Legend of the Jaguar FAQs

What’s the minimum bet on Legend of the Jaguar?

Minimum bets in Legend of the Jaguar start from £0.25.

What is the RTP of Legend of the Jaguar?

Legend of the Jaguar slot has a 96% RTP.

Can you play Legend of the Jaguar on a mobile phone?

Yes, the Legend of the Jaguar slot is compatible with all smartphones.

Does Legend of the Jaguar have a free spins feature?

What’s the volatility of Legend of the Jaguar?

Legend of the Jaguar is a medium to high volatility slot.

Games Similar to Legend of the Jaguar

Unfortunately, this game is currently not available on Wizard Slots.