Phoenix Graveyard by ELK Studios is a 5-reel, 243-ways-to-win, and 6-reel, 4,096-ways-to-win slot. With a 95% RTP, the maximum potential payout available is 10,000x your stake. Phoenix Graveyard is a high volatility slot with bonus features like Multipliers, Free Spins, Re-spins and more. Register on Wizard Slots today to play the slot game for stakes ranging from 20p to £4 per spin.

The death-themed Phoenix Graveyard online casino slot game by ELK Studios starts with 5-reels, 3-rows, and 243-ways-to-win before expanding to 6-reels and 4,096-ways-to-win. Launched in 2022, the 95% RTP slot game has a maximum potential payout of 10,000x your stake.

Set in the ghastly Phoenix Town, the Grim Reaper has up to 4 bonus features available to trigger. These include; Free Spins, Re-spins, Multipliers and Wilds. You can potentially win up to 10 free spins in the Bonus Game feature, while wild multipliers land during the Re-spins feature.

Most ELK Studios slots are HTML5 compatible. So, you can enjoy the gorgeous Phoenix Graveyard slot on every mobile device after registering an account with Wizard Slots online casino. So sign up now to play slot games online like Phoenix Graveyard.

How To Play Phoenix Graveyard

Click on the Coins icon on the left side to set your preferred bet values.

Use the Spin icon on the right to start the game. The reels should spin for a few seconds before coming to a random stop.

Winning combinations in Phoenix Graveyard occur when 3 or more matching symbols land on adjacent reels, starting from left to right. For example, the gold mayor symbol can pay the best value, where 3, 4, or 5 on a payline trigger 1x, 2x, or 4x your stake.

Special symbols include the bonus symbol and 3 wild symbols. Bonus symbols can trigger the Free Spins round, while the Phoenix Wild replaces other symbols to complete potentially winning combinations. 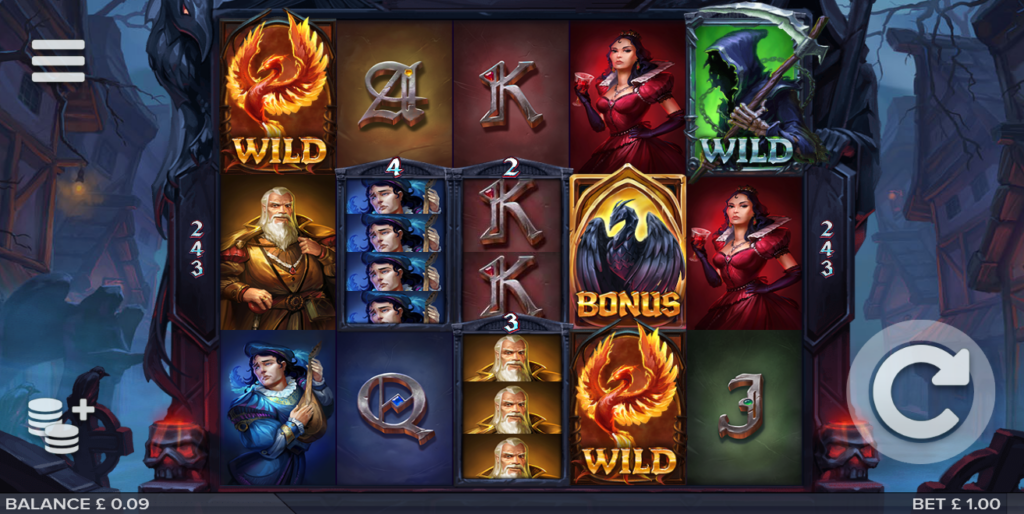 Sudden Death feature: You can trigger the Sudden Death feature randomly during the base game. It slices symbol positions and increases the number of win ways. For example, one of the paying symbols lands inside a tombstone and then, it expands to fill each position inside. The process can potentially lead up to one million ways to win. You can check how many ways to win you have on the left-hand side.

In addition, the wild multiplier equal to the number of symbols on display applies before his first walk. The process continues until the Grim Reaper Wild walks off the furthermost reel. Also, the Death Lord can land on reel 5 to trigger extra re-spins.

Bonus Game feature: This feature starts when the bonus symbols land anywhere on the reels. If 3, 4, or 5 bonus symbols land, they trigger 6, 8, or 10 free spins, plus 1, 2, or 3 Phoenix Wilds. The Phoenix Wild symbols can land and spawn on any positions the triggering bonus symbols appeared on. When they do, they award wild multipliers equal to the number of symbols in the reel position. Then, the wilds jump to a new position. In addition, the Phoenix Wild jumps to new positions on any re-spin and free spin. Lastly, you can potentially win extra free spins, up to 20 spins in total. 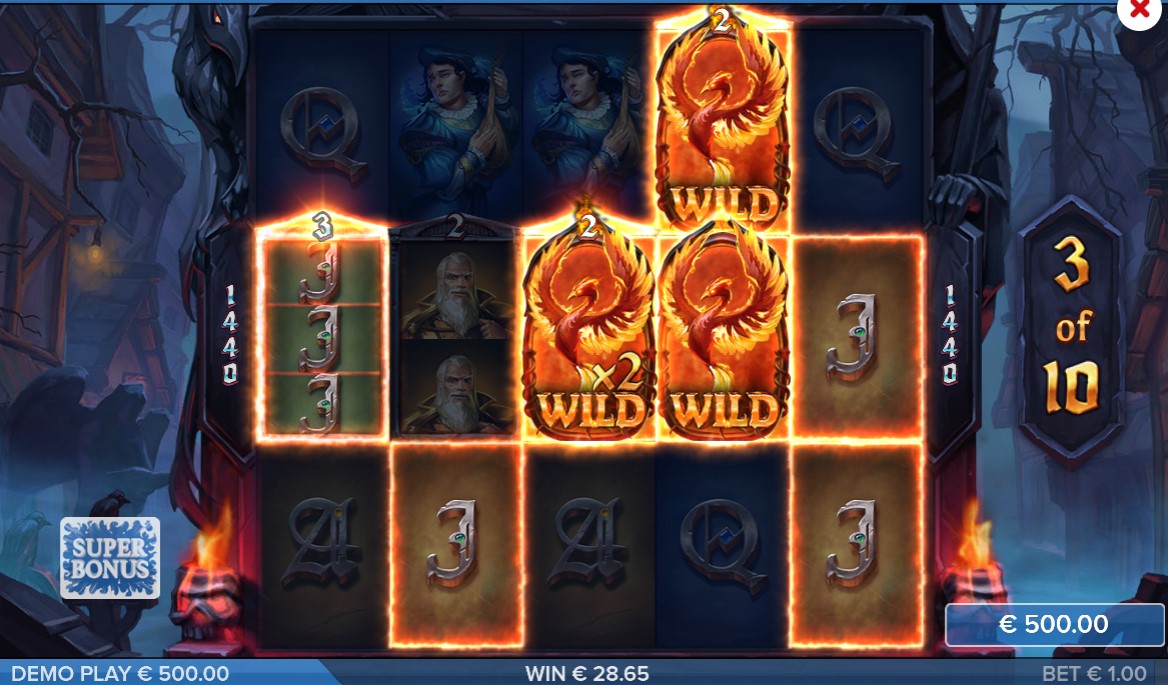 Phoenix Graveyard has a 95% RTP and high volatility. The maximum potential payout available is 10,000x your stake. Stakes range from 20p to £4 per spin, and the Phoenix Graveyard slot is compatible with all iOS and Android smartphones, PCs, and tablets.

Explore the dark Phoenix Graveyard slot that takes you to the abandoned Phoenix Town, run by a corrupt mayor and his wife. Any inhabitants who don’t follow the rules get a visit from the Grim Reaper. Its dark graphics bring the old-style town to life. Its HD visuals ensure you don’t miss a beat on-screen.

In addition, the creepy soundtrack adds character to every spin. Symbols on each spin include; gothic style low value card symbols A to J, and the high paying icons are the blue Mandolin-wielding person, the gold mayor, and his wife.

You can play the Phoenix Graveyard slot online at Wizard Slots casino today! 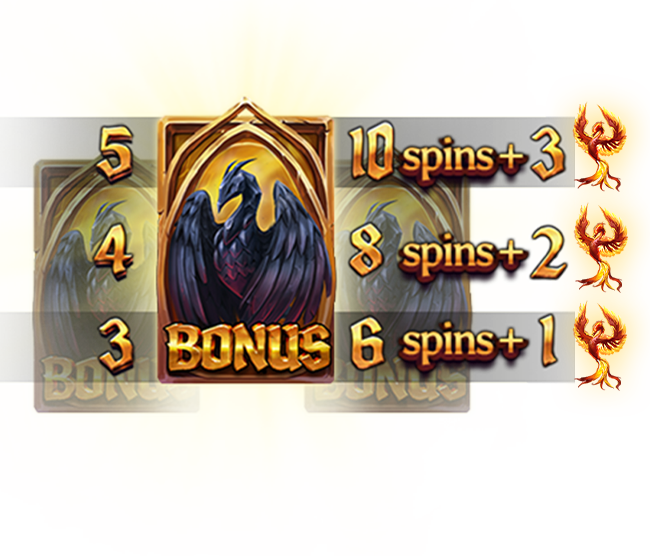 ELK Studios curates the sinister feel in their Phoenix Graveyard slot so well, you may literally feel a chill every time you play the game. The developer is well-known for their innovative style, which shines through in this slot.

For example, the Phoenix Graveyard slot has impeccable visuals and a perfect balance of exciting bonus features. Adding the walking wilds to the re-spins feature is a great addition because it adds a unique touch along with the slicing symbols. The Free Spins feature can also be a treat, thanks to the Phoenix Wilds.

Overall, we think many players will be happy with this release. This goes especially for players who enjoy a dark and twisted theme like this one. Check out what else the Phoenix Graveyard slot offers when registering an account with Wizard Slots today.

What is the RTP of Phoenix Graveyard?

The Phoenix Graveyard slot has a 95% RTP.

Can you play the Phoenix Graveyard slot on a mobile phone?

Yes, the Phoenix Graveyard slot is compatible with all Android and Apple smartphones.

What is the maximum win in Phoenix Graveyard?

The maximum potential payout in the Phoenix Graveyard slot is 10,000x your stake.

Does Phoenix Graveyard have a free spins feature?

What’s the volatility of Phoenix Graveyard?

Other Games Similar to Phoenix Graveyard