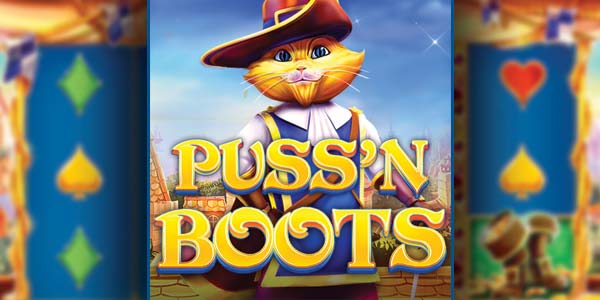 Puss N Boots is a 5 reel, 20 payline slot by Red Tiger Gaming. It has a fairytale feel based on the legendary Puss N Boots from the film Shrek.

Travel back in time and be welcomed into a fantasy medieval town. You'll be greeted by an adorable ginger cat who is dressed in musketeer attire. Although he may look cute he is a fierce little character! You'll join Puss N Boots on exciting quests and conquer swap reels, swap tiles, and mega reels to win cash. Play more today on wizard slots.

You can check some of our best online slots from our guide.

Puss N Boots is up to his usual antics and wants you to join him on an exciting treasure hunting adventure. Put on your matching musketeer attire and let's go!

This Red Tiger Gaming slot is based on the classic fairy tale of Puss N Boots. Puss N Boots is a 5 reel, 20 payline slot with a medieval musketeer theme. The 3D animations are adorable and the reels are very golden which is hopefully a sign of the golden prizes to come. A dreamy, fairytale-like medieval city can be seen in the background with a grand castle and small cottages. Symbols include a musketeer hat, boots, gloves, and sword.

The Wild Symbol - The wild symbol is Puss N Boots. He replaces all other symbols except the scatters. Landing 5 wilds on a line will award 1, 000 coins.

Swap Reels feature - In the swap reels feature, puss will change the order of the reels to help you create a winning combination.

Swap Tiles feature - Puss will use his sword to stab symbols and change them into new symbols to help you make some great winning combos.

Mega Reels feature - The mega reels feature can offer some mega prizes too. In this feature, all lower value playing card symbols are taken away. A spin is then made with only the higher value symbols in play.

Five of a Kind feature - Puss will move symbols around the reels to create a 5 of a kind win.

Free Spins Feature - Landing 3 or more free spins symbols will activate the free spins feature. Once activated, you'll also be given the chance to play one of the above mini-games.

Red Tiger Gaming has been developing entertaining and original slots since 2014. They create some of the best online slots on the market, entertaining players across Europe and Asia.

Together with the best mathematicians, software developers, graphic designers, and gambling experts, Red Tiger Gaming creates slots which are imaginative and unique. They have a wide range of games to suit players of all kinds. There are sporty slots, fruity, slots, adventure slots, and so much more. If you enjoyed Puss N Boots, you may also like these Red Tiger Gaming titles:

Learn more by heading over to wizard slots.

Puss N Boots is an excellent slot. The 3D animations are incredibly designed which makes the gaming experience so much better. The classical guitar music adds a nice touch too! There are many great features in this slot which gives you plenty of chances to make lucky winning combinations. Looking for more? Check out Gorilla Go Wilder.