The title Queen of Thrones probably pricks up the ears of some Game of Thrones fans, due to the obsessive cult-like following that the series has.

But rather than a game themed around a weekend-long Netflix binge, this uses Medieval chess as it’s inspiration, for a 5 reel and 30 pay line slot game that involves plenty of wild pieces on its proverbial chess board.

If you are someone who will regularly play slots online then this chess themed slot is right down your street!

Leander Games are the people to thank for going into such depth with this intelligently themed, Medieval Chess style new slot games.

They have put immense detail into the game and it’s symbols, with all of the chess pieces having its own characteristics and even the layout of the game relating back to that theme. Smart features such as the all-powerful Queen make this game exciting, too.

For other titles from Leander Games, check their website. God of the Sun stands out as another strong addition to their collection. 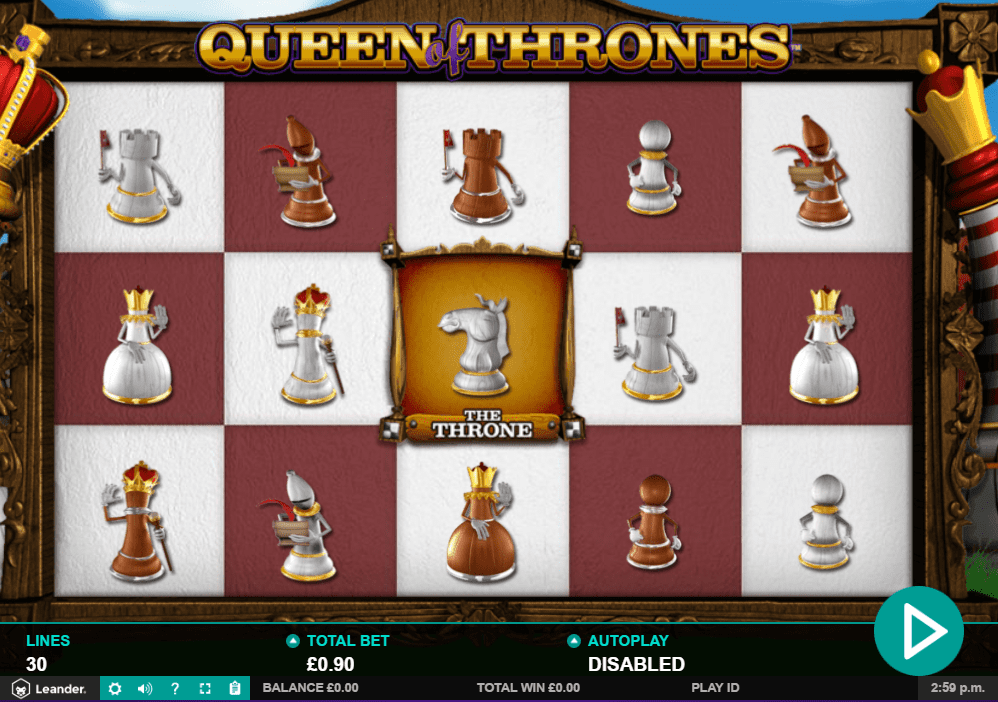 The Medieval Chess theme is carried out thanks to an old timey look and feel to the game. Well designed, almost carved chess pieces go a long way in showing the amount of detail that has gone into the game. Also, a rather unique layout exclusive to the theme makes for an interesting play, too, ensuring that Queen of Thrones probably stands out amongst the last two or three online slot games that you would have tried.

As for the symbols on the 5 reels in action here, it is of no surprise that - once you learn the role that the Queen of Thrones, at least - the King is the top paying symbol. This all-powerful piece has the ability to gift you with a huge 2,500 coins within the context of your bet. With a maximum bet of £60 and a minimum of 30p, you’d do well to not earn a fat stack of money when you land 5 of these Kings.

You’ll notice that the aforementioned Queen is placed right in the middle of the reels or chess board if you will. If pieces land adjacent to her throne, she will turn them into wilds with the power that her crown gives her, making for a really effective bonus feature to this game. There are an array of wilds, too, each with their own characteristics and traits that can help you build some truly royal wins.

A Free Spin symbol could pop up on your reels at some point and hopefully, with a bit of luck, you’ll be able to get 3 or more of them. 3 symbols will land you 10 free spins with 4 getting 15 and 30 free spins being the prize for 5 of these free spin symbols. These also trigger a Black vs Whites feature which brings the chess board to life.

All in all, this is a brilliant online video slot game. A niche theme carried out brilliantly through a clever narrative makes for a game that has truly been made with love and care. Smart features and playability across all major platforms, there is a lot to enjoy about Queen of Thrones.

If you enjoyed this exciting online slot then why don't you try Fruits & Jokers?