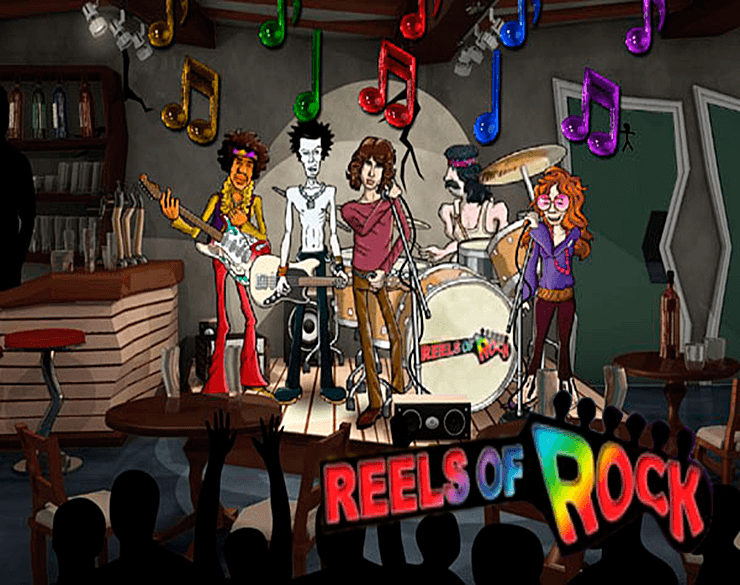 Reels of Rock by Saucify is a 5 reels and 9 win lines slots online uk. It’s one of the rock and roll themed slots online on Wizard Slots. The game celebrates all your favourite rock music icons namely; Jim Morrison, John Bonham, Jimi Hendrix and more. Special features in the game include a free spins feature and a bonus round.

Saucify – The Developers Behind Reels of Rock Slot

Saucify produces both online slot games and table games though the UK developer is mostly known for slots. Their slots online are playable on casinos such as Wizard Slots. They’ve got a huge collection with all your favourite 3 reel games or 5 reel too if you’d prefer those. 3 reel slots mostly include fruit symbols and few or no bonus features, while 5 reel slots include innovative themes and 1 or 2 bonus features.

When the Saucify launched in 2006, they went by BetOnSoft. This was before a group of private UK investors took over the company. Most of their games are plain and feature simple graphics and easy to win  bonus rounds. 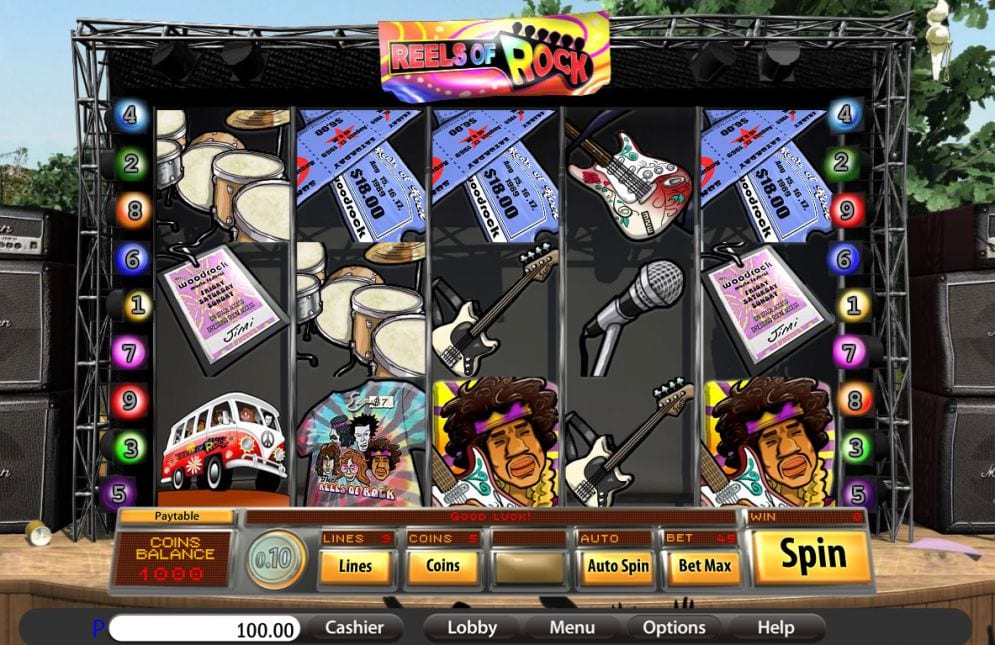 Saucify's Reels of Rock is one of the slots online casino Wizard Slots has on the site. It’s the best slot for players who love the rock and roll culture. The design is bright and colourful. All your favourite icons have been well represented here with symbols featuring Sid Vicious, Janis Joplin, Jim Morrison, John Bonham and Jimi Hendrix. There’s also concert tickets, a microphone, a tour pass, backstage passes, an electric guitar and drums. The rock stars appear as caricatures of themselves.

The Jim Morrison symbol pays out the highest value in the game where landing 5 wins you 2,500x your stake. Janis Joplin is next rewarding 1,000x your stake for 5. The other symbols reward payouts ranging from 750x to 1000x. The wild symbol is represented by Jimi Hendrix (also Jimmy Plectrum). The wild can substitute all other symbols on the reels. Whenever the wild symbol forms part of a winning combination, Jimi Hendrix launches into a guitar solo.

There are also 2 scatter symbols in the game. One is Sid Vicious (aka Vicious Tim) who is responsible for triggering the free spins round. The other scatter is represented by the tour bus and it activates the other bonus. 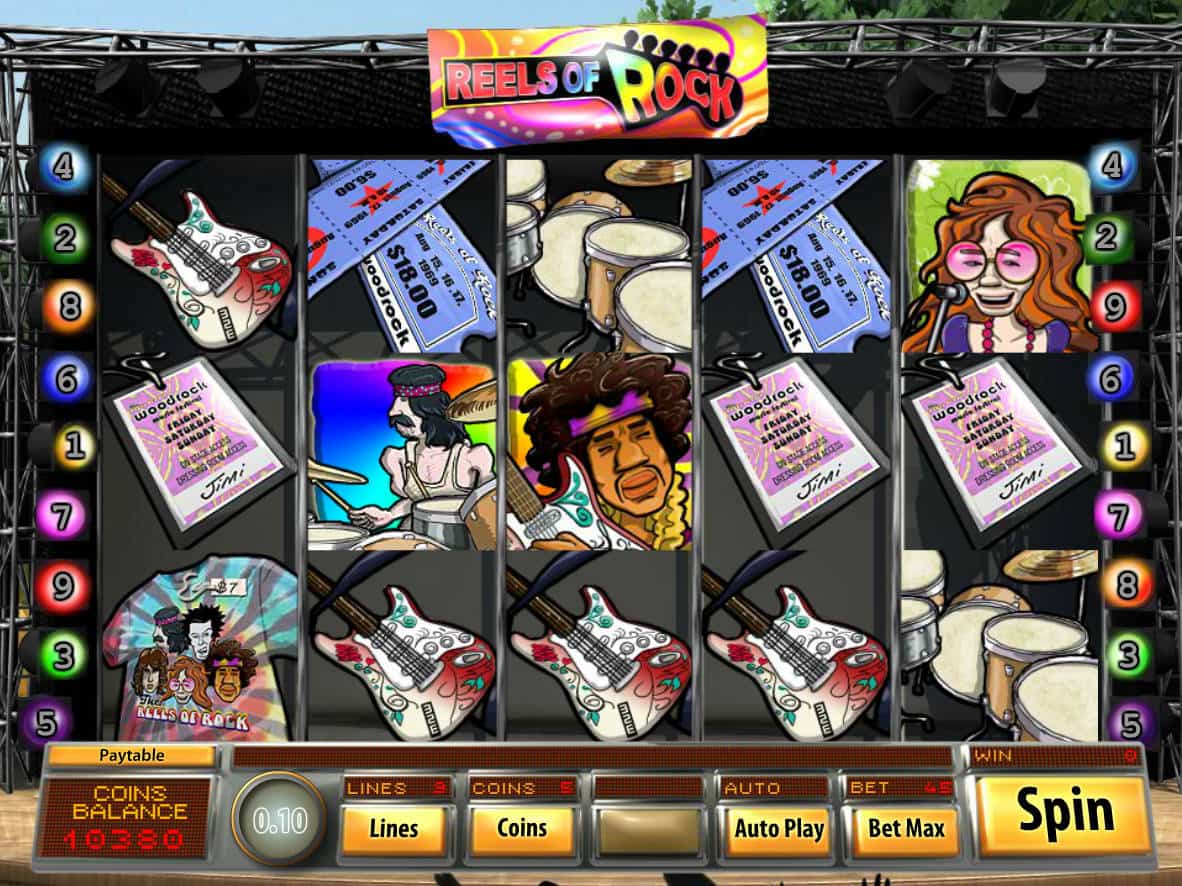 Bonus features are a must have for a lot of players looking for slots online on Wizard Slots. Some of the ones you enjoy here include; 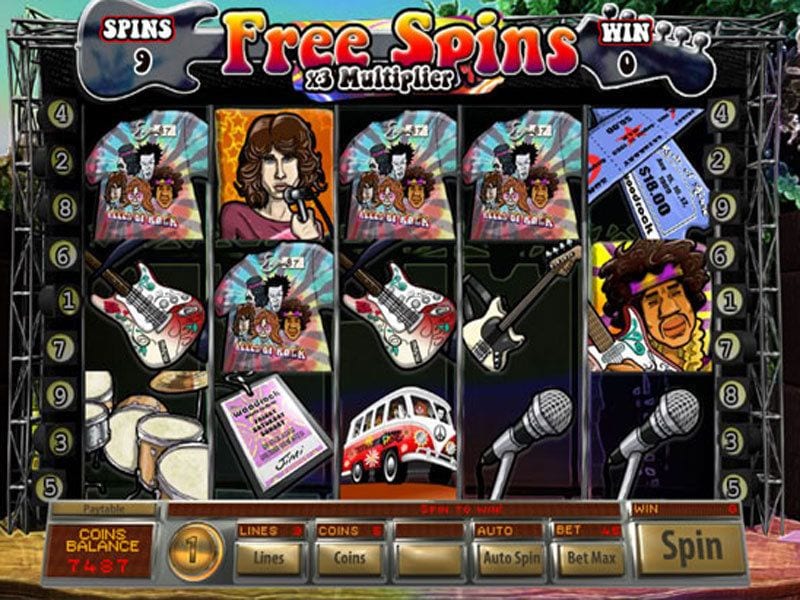 Our Verdict on Reels of Rock

You can play Saucify slots online on the leading UK casino Wizard Slots. Their Reels of Rock slot has an awesome design and theme. Adding in the biggest rock stars of all time was a good decision. It really makes for a nostalgic moment on all your spins. Speaking of your spins, each of them will be accompanied by rock tunes so make sure your favourite doesn’t pass you by.

The bonus features are also worth checking out. The free spins feature has you winning up to 40 free spins with the chance to re-activate the round. The Reel Rockin Tour bonus is unique and different. It’s more like a picks game and comes in handy when you’ve had a rough run in the game. The cash prizes you win in the bonus will give you a much needed boost. For more great cash prizes, check out the pirate themed Rage of the Seas slot!