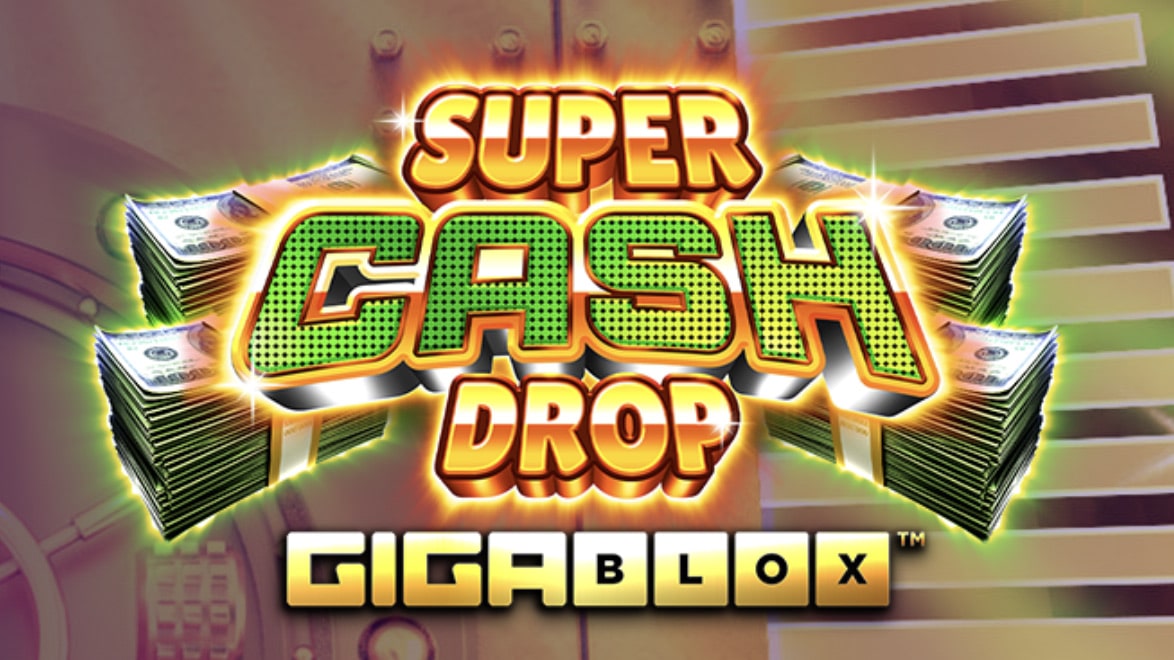 Super Cash Drop Gigablox is an online slot created by Bang Bang Games and Yggdrasil Gaming with 6 reels, 4 rows and 40 paylines initially, but can increase to 60. The reels could also expand to 6x6. It features expanding reels, expanding wilds, a Super Free Spins feature, and a Gigablox mechanic. The Super Cash Drop Gigablox slot has a Return to Player (RTP) rate of 95.5%. If you want to discover more of the best new online slots like this one, then visit Wizard Slots today!

One of the Super Cash Drop features is the Super Reel Expand feature that can expand the grid to a 6x6 size with an increase from 40 paylines to 60.

The Super Cash Drop Gigablox slot has a reel size that changes from one size to the next. You will start with 6 reels, 4 rows and 40 paylines. The reels might randomly change while you spin, going from 6x4 to 6x6 with 60 paylines.

Before you open this game, you must choose whether you want to play with or without sound. Then, use the arrows below the reels to set your bet from £0.20 to £100 per spin, then press Play.

The wild symbols can substitute all other symbols, except the scatter. It can award you up to 5x your stake for a 5 of a kind. High-paying regular symbols are the dollar sign and the gold bar symbols, awarding 2.5x and 2x your stake, respectively, for a 6-of-a-kind combination.

Mid-value symbols are the wallet and the piggy bank symbols with 1.5x your bet payouts for a 6-of-a-kind combination. The gold-encased spades, heart, diamond and clubs are the low-paying symbols awarding up to 1x your stake for landing 6 on a payline.

You form winning combinations by landing 3 or more matching symbols on active paylines. 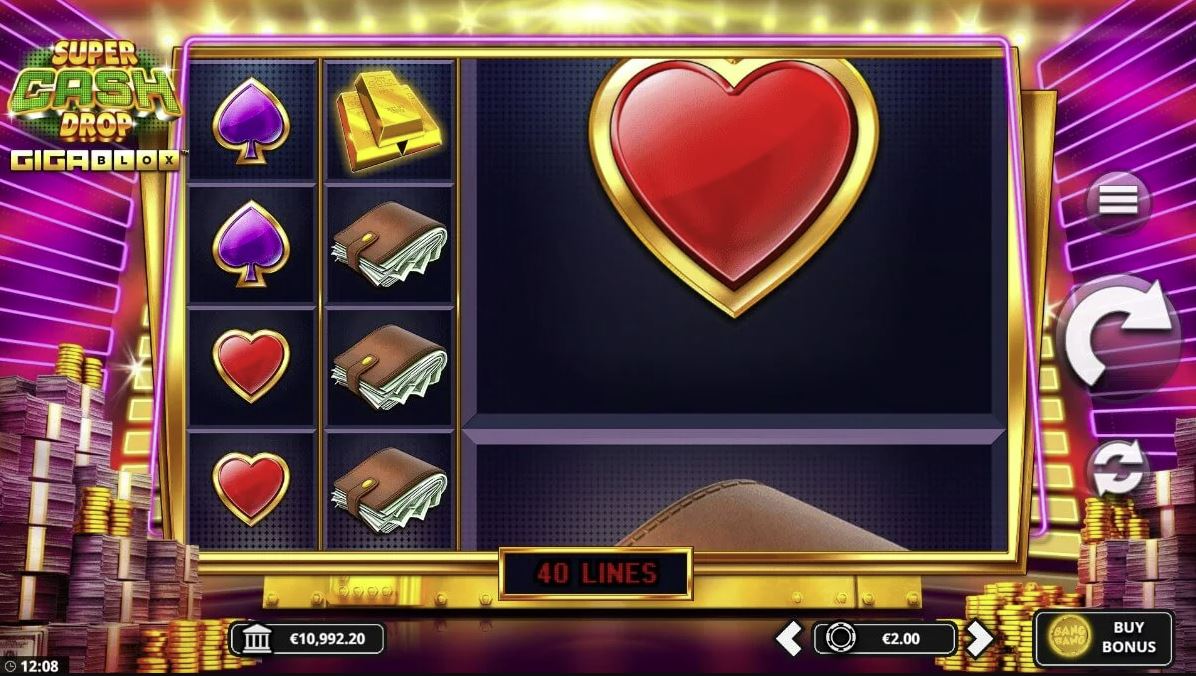 The Gigablox mechanic is active on every spin and will transform random symbols in sizes between 2x2 to 6x6.

This feature expands your rows from 4 to 6. And if the rows are more, the paylines also expand. So, you go from playing with 40 paylines to 60 paylines. The setup would be as follows:

The Super Stretch Wild feature is activated by landing 1 or more wild symbols. The wild symbols will then expand to cover the entire reel they land on. Additionally, you will receive a multiplier that is the same number of wilds you landed.

Say you landed 1 wild on one reel and 2 on another. They will expand to fill the reels and receive 1x and 2x multipliers, respectively.

During your spins, you may occasionally see wilds with an orange background. These are locked wilds. If one or more of these lands on the reel, they will expand and cover the entire reel, and you will get a respin.

However, the locked wilds will remain in place with their multipliers. Therefore, you will receive another respin if you land more locked wilds during the repin. This feature can go on until you are no longer landing locked wilds.

Additionally, for every extra scatter symbol you land during the bonus game, you activate 1 extra spin added to your current bonus spins. The Super Free Spins feature is playable on the 6x6 reel with 60 paylines. 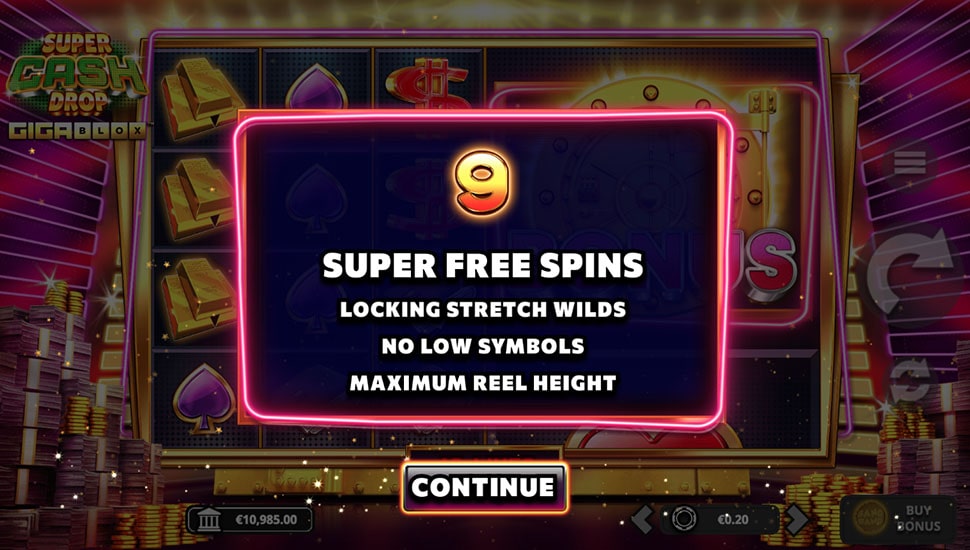 The Super Cash Drop slot is a high volatility slot with an RTP rate of 95.5%.

With colourful neon tones and stacked cash at the side of the grid, the design has a look similar to the set of a TV game show. Rich symbols adorn the reels, including cash-filled wallets, gold bars, stacks of cash, dollar signs, and the standard playing cards.

The soundtrack is an upbeat, groovy tune that may get your feet tapping to the beat.

The Super Cash Drop Gigablox slot has pretty straightforward gameplay. The wild symbol is the game's star because of its expanding nature and the potential multipliers. Not to mention there's a maximum potential win of 7,024x your stake.

The RTP rate is decent, even though it is slightly lower than average. You can play this slot here at Wizard Slots or browse our vast selection of slots.

Can you play the Super Cash Drop Gigablox slot on a mobile phone?

Yes, you can play the Super Cash Drop Gigablox slot on a mobile phone that supports games built with HTML5 software.

Can I win real money on the Super Cash Drop Gigablox Slot?

Yes, the Super Cash Drop Gigablox slot is a real money slot. To play it, place your bet from a minimum of £0.20 to £100 maximum per spin, and you could potentially win up to 7,024x your stake.

What is the RTP of Super Cash Drop Gigablox?

The RTP of the Super Cash Drop Gigablox slot is 95.5%.

What is the biggest win available on Super Cash Drop Gigablox?

The max win on Super Cash Drop Gigablox is up to 7,024x your stake.

Does the Super Cash Drop Gigablox slot have free spins?

Yes, the Super Cash Drop Gigablox slot has the Super Free Spins bonus feature that could award you up to 36 bonus spins.