Vikings Fortune: Hold and Win is a 5 reel, 25 payline slot with an epic Norse theme. It's a slot by Playson with features like free spins, streak respins and colossal higher value symbols. There's also a chance to win 1 of 3 jackpot prizes. Start your stakes on all devices from 25p to £100 a spin. Play today at Wizard slots.

This slot has got a comic book-style theme that is simple, but well-constructed. The action here is set against a Viking village harbour background. Symbols on the reels include card values A to J, a wolf, a raven and a young Viking woman.

The Viking warrior pays the highest value. When 3, 4 or 5 Viking warrior symbols land, a payout of 1x, 4x or 20x your bet is rewarded. The wild symbol (represented by the shield) also awards those same amounts. The wild can land on all of the reels and replace all the other standard symbols. The slot includes 2 feature rounds:

The wolf, colossal raven, Viking and woman symbols can reach 2×2 or 3×3 which further increases your chances of forming big winning clusters. A round of 8 free spins is awarded when 3 scatters land on the same spin.

Each of the previous has a cash amount attached to it. The triggering coins stick in place and 3 respins are rewarded. When a new coin symbol hits, the respins revert to 3. Once you have completed your respins, all coin values are added and the result is your total win.

The chance to win a Jackpot is also possible during the feature when you play slot games online.

Both Mini and Major Jackpot are activated when the corresponding bonus coin lands. When all 15 reel positions fill with coins, the Grand Jackpot lands on top of the coin values. That's equivalent to over 1,000x your bet. You can also win over 1400x your stake on a single free spin. 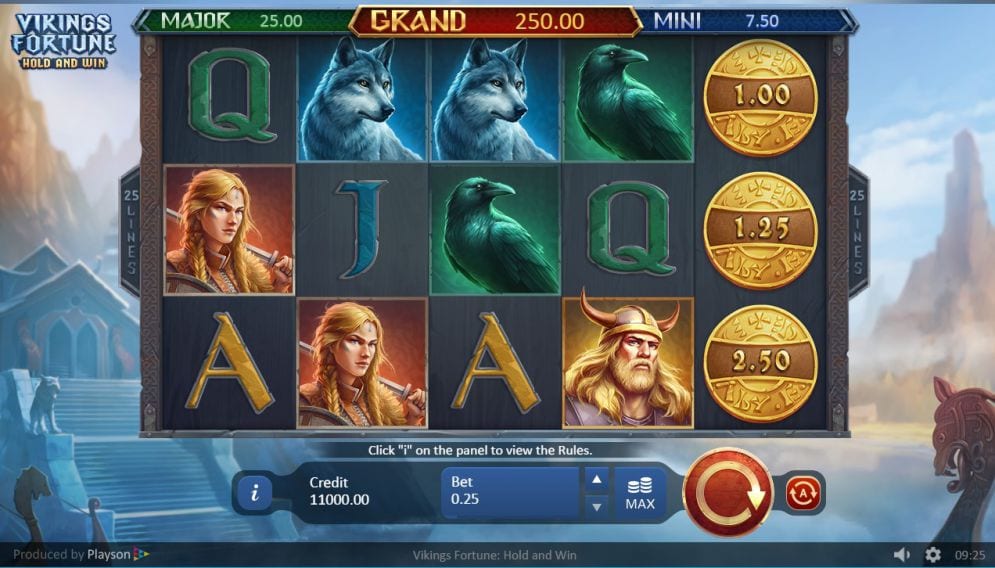 Playson was established quite recently in 2012, which makes them a newcomer in the industry when compared to other bigtime slot developers who have been operating for years.

Playson is quickly expanding, proving that it is a highly ambitious company capable of making some of the best online slots and is more than able to compete with other developers like Microgaming, NetEnt, Pragmatic Play, iSoftBet, etc. 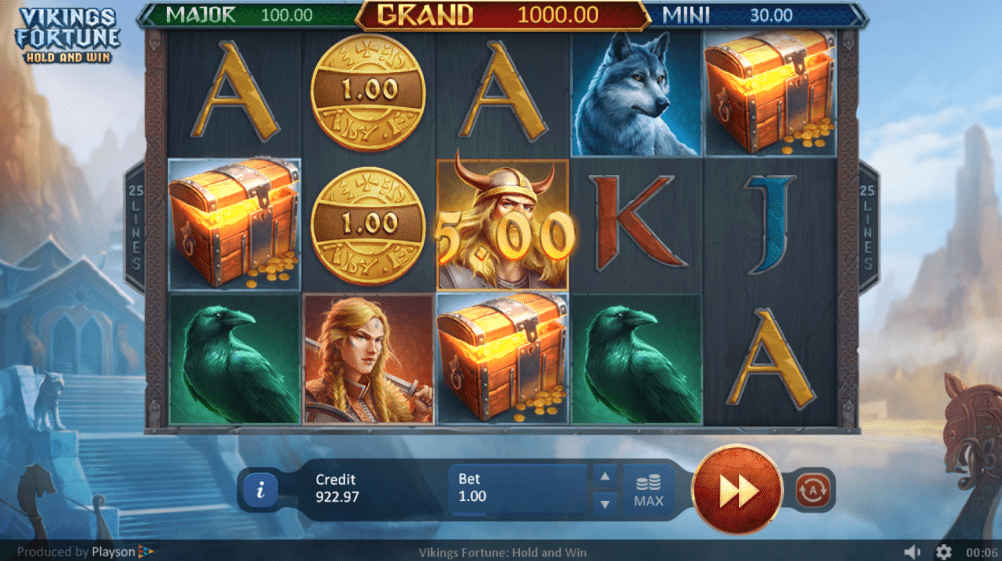 There are several Norse themed slots out there and Vikings Fortune: Hold and Win is definitely one of the good ones. It has a nice design and some decent features which offer plenty of action.

When you combine the great visuals, easy gameplay, enjoyable theme and its medium to high volatility, Vikings Fortune: Hold and Win turns out to be one of the most playable Norse themed slots out there. Or you could also play Lucky Strip!