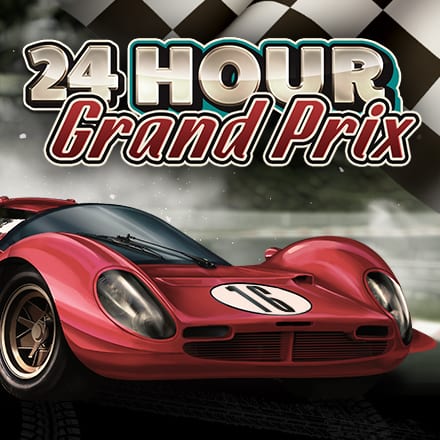 24 Hour Grand Prix will have lovers of cars and car races hooked with this online slots from by Red Tiger Gaming. This slot is set race-themed, and the reels are set against an asphalt background and take an unusual turn from the standard five by three grid you'd find in slots online. The slot comes with a six by four grid, 30 paylines and an RTP of 95.73%.

You can play this game across all devices, your mobile phones and desktops, as you enjoy the bonus two features, the game offers called the Super Wilds feature and the Race spins feature. It’s also unlike other online slots as it offers two progressive jackpots, the Daily Drop Jackpot and the Hourly Drop Jackpot. Get into this racing-themed slots games online when you play now on Wizard Slots or read more about it below.

24 Hour Grand Prix is developed by Red Tiger Gaming, a leading casino games developer. They are well known in the world of online slots UK with game themes that include racing, adventure, action, arcade, aqua-life and a lot more.

Despite their relatively new age in the casino world, they've succeeded in being a significant competitor with over 150 successful games to their name. Their online slots come with exquisite graphics and unique features that will leave you fascinated.

They became a leader in online slots UK with their rather imaginative bonus games as would also be found in this slot. Some of their top online slots include:

These games and more from this developer are available and ready for you to play on Wizard Slots. 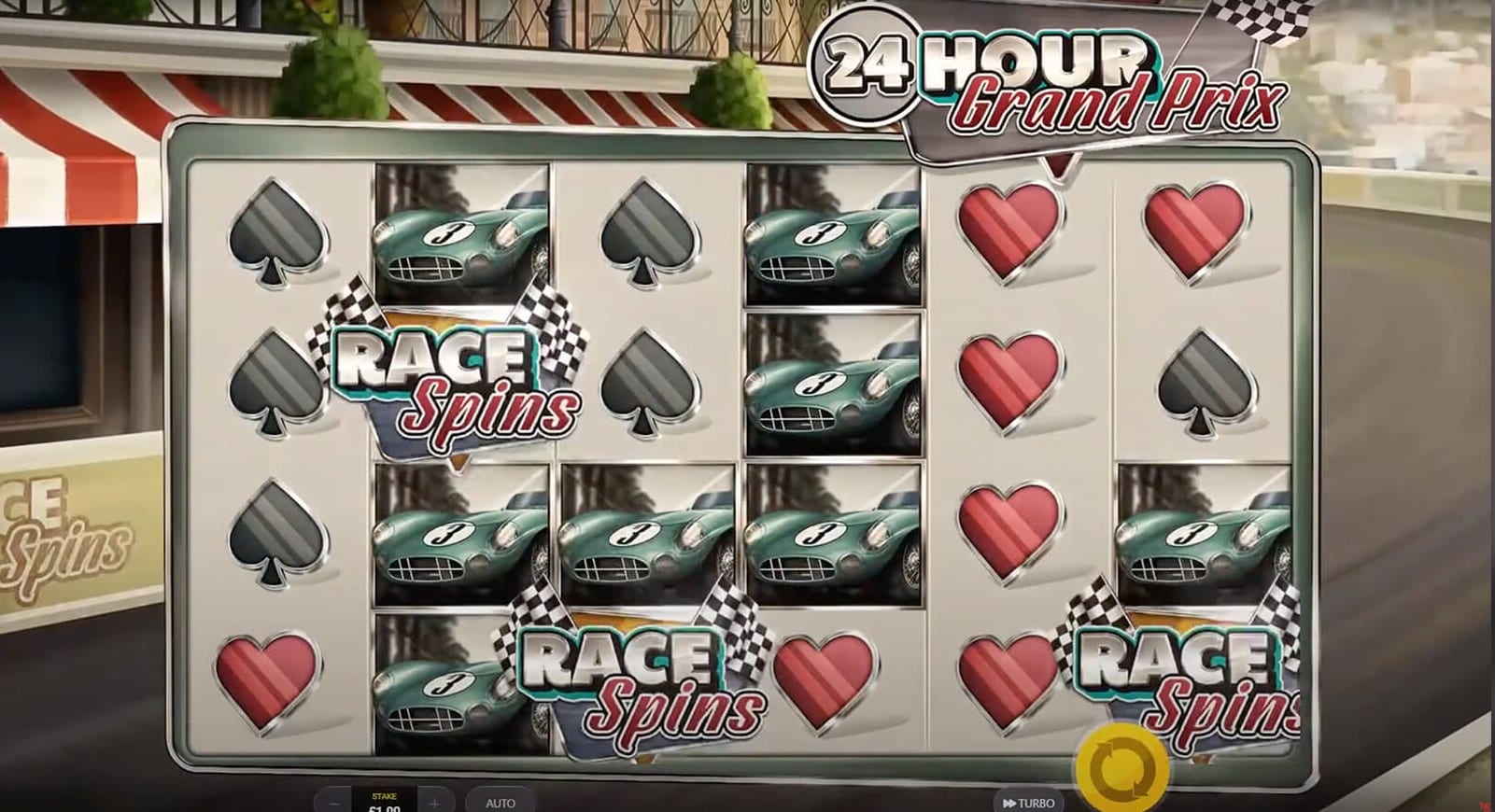 24 Hour Grand Prix is inspired by the 24 Hours Of Le Mans, the oldest endurance car race in the world held every year since 1923. As you’d also find in this game, the backdrop resembles that of Monaco and its famous racing track, the soundtrack you'd hear from this game is that of Rock n Roll and Blues, which is also accompanied by engine noises to keep your body thrumming with adrenaline.

With the unusual grid of other slots online, the six by four grid come with reels sitting with symbols like racecars and playing cards. The racecars come with numbers and the higher the number, the higher its paying value.

Like in many other online slots UK, there is an autoplay button where you can choose between 20 and 100 spins. You can bet for as low as 0.10 credits and as high as 200 credits per spin. Your maximum winning potential is up to 2,166x your stake.

The game is of medium to high variance, and that only means big wins. The unique features to watch for when playing are the Super Wilds feature and the Race Spin feature. 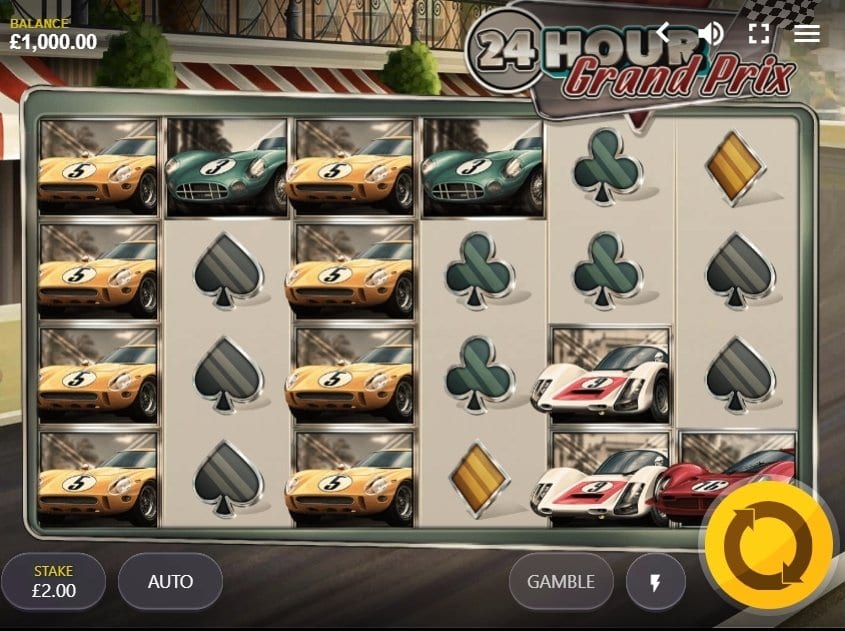 24 Hour Grand Prix features two amazing bonuses that make it more than a base game. They include:

Trigger these bonuses and stand a chance in winning big when you play this game on Wizard Slots. 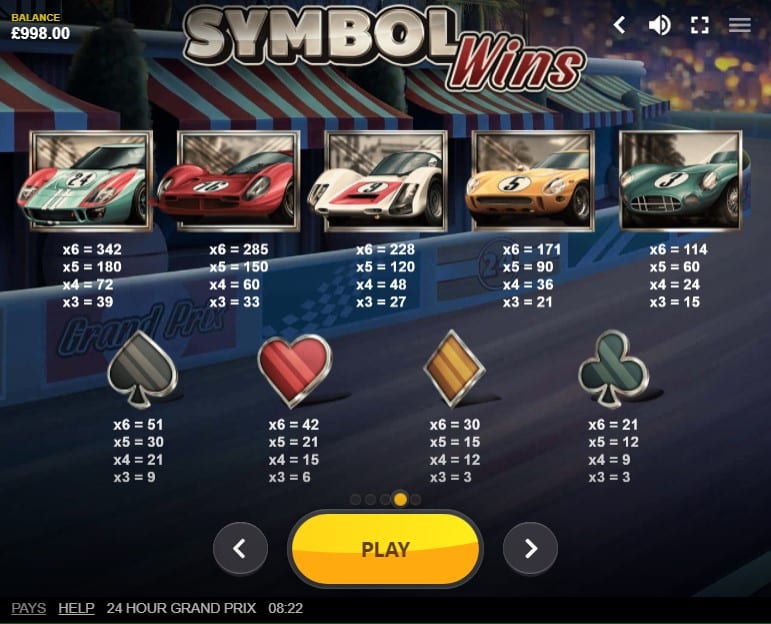 24 Hour Grand Prix drives exciting action and speed with its theme. Slots online have never been more enjoyable with graphics, bonuses, soundtrack, and two progressive jackpots such as this. The Jackpot feature can be won every hour when you land them on the reels and will be worth your time. Start playing this game or the Aztec Blox slot to win massively now on Wizard Slots!