Here's a great new online slots game for you Neon lovers on Wizard Slots. This neon-themed slot from Iron Dog Studio is based on the outskirts of Rio de Janeiro where the jungle meets the non-stop city streets.

On first glance, you might be mistaken for thinking Neon Jungle was based on the Las Vegas strip, especially when you consider the flashy features.

There is a Free Spin feature triggered by a fluorescent snail, a luminous Flamingo Bonus round based on the popular casino game, Keno Light, and dazzling 4x multipliers for massive wins. If you love graphics like this, you might also want to check out these slot games.

Although a relatively new name on the gaming development scene, Iron Dog Studio is part of 1X2 Gaming and has consistently proven that it can roll with the big dogs when it comes to creating great online video slots.

The game developers boast a stunning portfolio of games including Cherry Blast, Blood Queen and Treasure of Horus.  As well as knowing the slot business inside out, Iron Dog Studio take some inspiration from other classic casino games such as roulette and Keno (which is incorporated into Neon Jungle).

There are more slot games from this developer here on Wizardslots as well as other slots with the amazing neon theme: 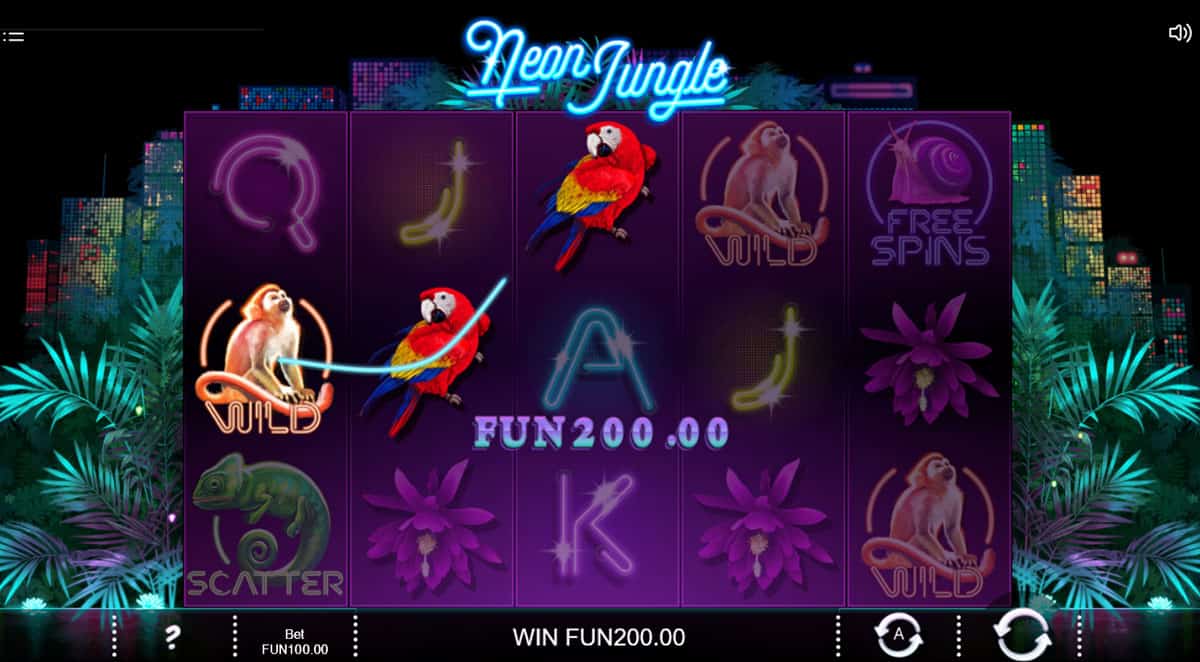 As mentioned, Neon Jungle is based on outskirts of Rio de Janeiro where the multicoloured lights meet the resplendent wildlife.  With this in mind, the basic symbols are a J, Q, K and A, while premium symbols are represented by animals including a tiger and a parrot.

Neon monkeys are wild and substitute for any symbol except for our friendly snail, the scatters and the pink flamingo. During every spin, a neon ‘glimmer’ will lend a pleasing glint to a random symbol.

Once that glimmer becomes a glow, players will be awarded a multiplier, free spins or a trip to the neon jungle for the Flamingo Bonus. If you are eager to play this game, it's best to check our guide and read more.

Free Spins - It’s not often a free spin round is activated by a neon glowing snail, is it?  Watch out for this glimmering grub as when he glows you know six free spins are coming your way.

Flamingo Bonus Round - No need to take a torch into this neon jungle.  Once triggered you are given the choice of picking your own numbers or using the randomiser before playing a luminescent version of Keno Light, a classic casino game where you could win up to 20000 coins for ten matches.

The bright sparks at Iron Dog Studio have made sure Neon Jungle works just as well on mobile devices as their desktop counterparts.

The Verdict on this New Online Slot

Neon Jungle is a highly original concept that looks great and plays like a dream.  The deliberately dimly lit game board really accentuates the neon symbols and gives you the feeling that you’re playing in a late-night casino.

The choice of certain symbols such as the luminous free spin snail makes the game that much more enjoyable.  Once you scratch the surface, it’s obvious that not only are the aesthetics on-point but leading lights Iron Dog Studio have crammed in features.

It’s particularly nice to see the Keno Light Flamingo Bonus next to more modern features such as 4x multipliers. It would be a bright idea to give Neon Jungle a spin. If you enjoyed Neon Jungle then you might also like Cosmic Crystals.