This mix up of bingo and uk slots online games takes place over a 5x5 grid. The Slingo original game Slingo Britain’s Got Talent has low volatility and an RTP rate of 95%.

You can try out Slingo Britain’s Got Talent from between 50p and £100 per game. There is a top win of 1000x your stake and 12 possible pay lines. So sign up today to check out all slot games offered at Wizard Slots!

If you haven’t seen the T.V show Britain’s’ Got Talent it is a game show where people audition with a talent to try and get to the next round. The shows logo and stage is coloured a deep, recognisable blue and that is exactly what colour the game’s background is.

Other than the T.V show’s logo in the top left corner, that is as much of the show’s theme that Slingo Britain’s Got Talent takes. The symbols on the reels are numbers from 1-75, just like they would be in a game of Bingo. These design of these numbers do not pop like they would as part of a game show. The lettering is black atop a white background. Hardly the most inventive design.

Fans of the show will recognise the famous theme tune, but other than that the Slingo Britain’s Got Talent slot game doesn’t really do anything with its theme.

Slingo Original are the developer that created the concept of Slingo over 20 years. Since then they have been tampering with the formula, bringing us such great Slingo content such as:

Players that are bored of the traditional slot games formula might want to give Slingo a try. So, how does Slingo work exactly? 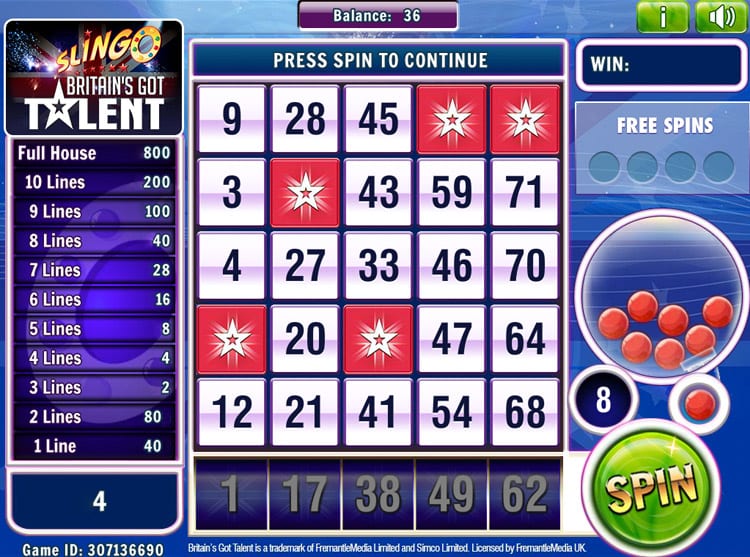 How to play Slingo Britain’s Got Talent Slot

As mentioned already, Slingo is a cross between a regular slot game and bingo. The player places their stake on a bingo card and needs to spin the reels to try and match a line of numbers to complete the card rather than achieve a pay line. The player need mark off 5 numbers either horizontally, vertically or diagonally to complete a Slingo.

To the right of the game grid, there is the bingo machine. Under this is the spin button. Hit this to reveal the next number called.

To find a game of Slingo Britain’s Got Talent, look no further than the wizard slots games library. Scroll through to find the game that you wish to play and hit ‘Play Now’. This privilege of speed is only reserved for registered players. To sign up for wizard slots, follow these simple steps:

From here you will be able to play all of the slot games the site has to offer including Slingo Britain’s Got Talent, and the amazing Slingo XXXtreme slot. 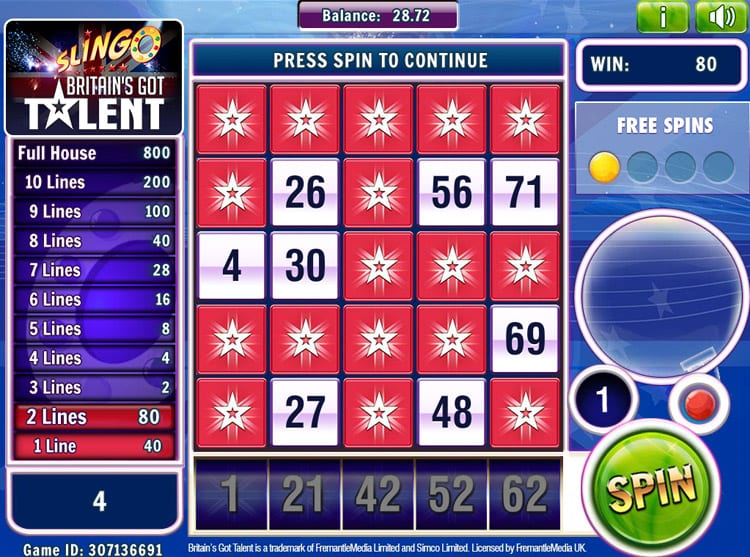 Slingo games work a bit unlike other slot games and Slingo Britain’s Got Talent is no different. The stats are all similar but skew more toward the bingo crowd’s expectations.

RTP - the return to player rate is 95% in Slingo Britain’s Got Talent. This displays how much of the deposit a player will receive back on an average of one million spins.

Volatility - this is high in a Slingo game. It means that you will win a prize quite frequently but they will rarely be a high amount.

Betting Range: the most the player can bet on a Slingo card is £100 and the least is 50p.

Bonuses - Slingo games come with their own range of bonus features including Jokers, Super Jokers, Devils and Free Spins

For more helpful information about Slingo Britain’s Got Talent check out the table down below.

The bonuses in the Slingo Britain’s Got Talent slot will be familiar to those that have played a Slingo Original game before. These are commonplace among all their titles and there are 4 of them in total. There is also one more bonus that is frequent among slot games. These bonus features include:

Regular Slingo players will find these Slingo Britain’s Got Talent bonus features a bit run of the mill however, those new to the genre will be pleasantly surprised by the content, and if you love this genre, then you should definitely try the Slingo Fortunes slot.

It seems that both fans of Slingo games and the T.V show Britain’s Got Talent will be disappointed with this slot. The Slingo Britain’s Got Talent slot game doesn’t do anything with the theme it’s going for and its bonus features are fairly standard for a Slingo Original title. All in all, it feels like a missed opportunity.

Players new to the Slingo formula can try this out for themselves at wizard slots. Slingo Britain’s Got Talent does everything a regular Slingo game is known for so there are no nasty twists. Unfortunately, that is the reason this game only receives a score of 3/9. But if you are after a game with a much higher rating, then we recommend the Sister's Gift slot.