Can You Play Multiple Hands In Blackjack? 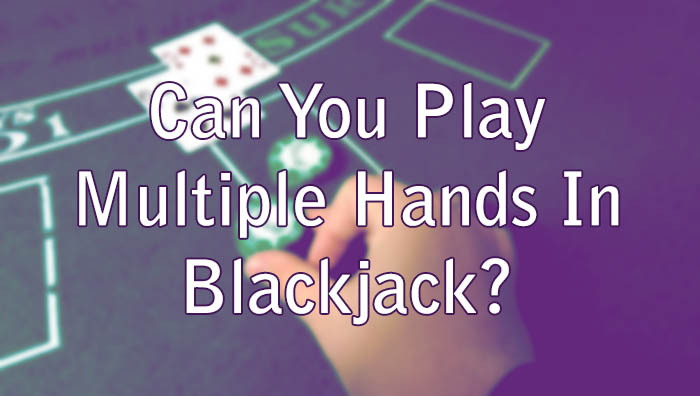 Blackjack always has its own rules for different variants, so it’s understandable if you may be struggling with a few game related questions. One might be whether or not you can play multiple hands in blackjack.

Can You Play Multiple Hands In Blackjack?

Yes, it is possible to play multiple hands in blackjack. However, the prospect cannot work at a full table.

Multi-hand blackjack uses the same principle as regular blackjack. The objective is to try and beat the live dealer by reaching as close to 21 without going over the number, also known as going ‘bust’.

Players have the potential to place more bets and make more moves if playing with multiple hands. In addition, they can have up to 5 hands instead of the usual 1. However, the exact number of hands supported may vary depending on which type of blackjack game you play and the rules of the casino you’re playing at.

Note that you should re-examine your motives before playing multiple hands in blackjack. For example, if you think multi-hands will improve your odds, they do not. The number of hands doesn’t change the gameplay or the house edge.

It’s important to note that playing multi hand blackjack does not give players an upper hand. Choosing to play two or more hands can be a personal preference, but it does pose some possible advantages, such as;

You can play 2 hands instead of 1

A potential benefit to playing multiple hands of blackjack is that you can play 2 hands at the same time instead of just one. For example, suppose all 5 players at a table play 90 hands in an hour. If so, then you could potentially play 180 hands per hour if one player exits the table and you decide to play 2 hands rather than 1.

However, Some online casinos may require players to bet at least twice the minimum bet on each hand if playing multiple hands, but this might not always be the case.

Has the potential for a more balanced game

Sometimes, playing multi-hand blackjack can even out the possible peaks and valleys of gameplay. For instance, if playing 2 hands, both hands could lose, both could win, or one could win as the other loses. If the latter happens, this means the potential net loss or gain would be 0.

Some players switch to playing multiple hands because they hope a high card to follow, thereby weeding out the low cards. This strategy could even out possible losses, but it can be impossible to track if you’re playing blackjack online.

Ultimately, the biggest potential advantage of playing with multiple hands in blackjack is that players can experience a new way of enjoying their favourite casino game.

Of course, playing multiple hands could be fun, but it does present one major disadvantage.

Can lead to more losses

Having several hands could mean several losses spread out. That’s because the player exposes a more significant portion of their bankroll to the house edge. Usually, the more hands per round, the more money you’re likely to lose.

Some players might mistake playing more hands for winning more. However, you do not alter the house edge/casino advantage by increasing hands in blackjack. Multi hand blackjack should be an avenue for your entertainment rather than a method to try and win more.

Is It Better To Play 2 Hands In Blackjack?

Playing 2 hands in blackjack could be better, depending on what you hope to achieve, or it could be worse. For example, if you like a high-paced game, then playing more hands could be a great source of entertainment. In addition, it can also be a good way of spreading out your risk. The strategy does offer possible advantages but can require some level of skill in the game to manage. It ultimately comes down to personal preference.

Playing multiple hands in blackjack could be a good idea with the right intentions. So, players must carefully analyse their motivations and game preferences before choosing to play blackjack with two or more hands.