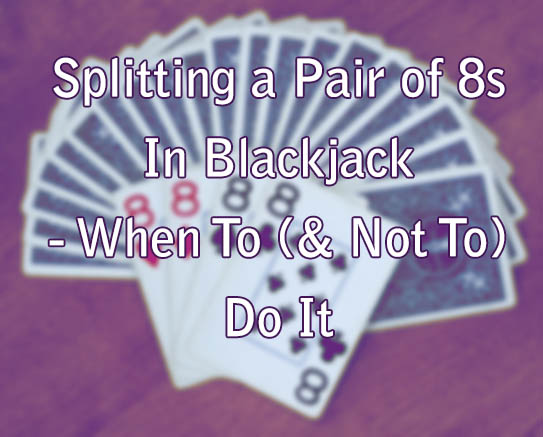 Blackjack is one of the most entertaining casino games out there. The fun of trying to beat the house, the rush of getting a blackjack, and the anticipation of potentially walking away with a big win - it's all part of the experience.

But, as with most casino table games, a certain level of strategy is usually involved, such as whether or not to split a pair of 8s. This is one of the decisions that could lead you to a win in blackjack, or it could also lead you to a loss. Understanding some basic blackjack rules can help you when playing and making decisions.

What Is Splitting In Blackjack?

Before we dive into the specifics of splitting a pair of 8s, let's first define what splitting is in blackjack. In simple terms, splitting is when a player has two cards of the same value (such as two 8s) and chooses to “split” them and play them as separate hands.

To split, you must place an additional bet on the new hand equal to your original bet.

Obviously, playing two hands rather than one can mean an increased chance of potentially winning. However, it may also double any losses. Of course, the result could also be relatively balanced, where you win one hand and lose the other.

Are You Always Supposed To Split 8s?

The short answer is no, you're not always supposed to split 8s in blackjack. In fact, there are certain situations where splitting 8s is not recommended.

For example, if the dealer's upcard is a 10 or an Ace, it is recommended that you do not split 8s. The reason is that the dealer has a high chance of getting a blackjack, which would mean that your 8s would ultimately be useless.

In that situation, it could be best to play the hand as it is and hope for a potentially decent outcome.

On the other hand, there are situations where splitting 8s can be recommended. For example, if the dealer's upcard is a 2, 3, 4, 5, or 6, it is recommended to split 8s. That is because the live dealer has a high chance of busting (going over 21), which would mean that your 8s could win!

So, in this situation, splitting 8s can be a great way to potentially increase your chances of winning. But, as always, it's essential to remember that the game's rules can also play a role in whether or not to split a pair of 8s.

Reasons To Split a Pair of 8s

There are many reasons why a player might want to split a pair of 8s, but typically, one of the main ones is to try and increase the likelihood of winning.

If you split a pair of 8s, you're essentially creating two separate hands, which means you potentially have twice the chance of winning.

This can be especially beneficial if the dealer's upcard is a 2, 3, 4, 5, or 6, as the dealer has a high chance of busting, which would mean that your 8s could be worth something.

Another reason to split a pair of 8s could be if you're playing a game with a rule that allows you to double down after splitting. In this case, you could decide to split your 8s and then double down on each hand. This has the potential to maximise any potential profits. However, it could also double the losses.

When Should You Not Split 8s?

While splitting a pair of 8s can sometimes be a great strategy, there are also situations where it could be detrimental. This is because the main objective for splitting 8s is to try and lower your odds of busting as much as possible.

So, if there's less chance your hand will bust, then you should not split 8s and could try other strategies, like surrendering or doubling down, depending on the blackjack version and casino you’re playing at.

For example, you should not split if - assuming you are playing with 6 decks- the dealer hits a soft 17. In that case, it could be best to surrender (if available). This is because you would be more likely to lose than win.

The bottom line is, splitting should typically only be done if it is more likely to yield winning hands for you and beat the house.

In this situation, it's best to either play the hand as it is, or surrender (if you can). However, it's important to note that this decision should be based on the game's specific rules.

However, if you split, you only have a 16% chance of winning, respectively. But it's usually better to be safe than sorry, so if you're unsure, it's generally best not to split 8s against a 10.

Surrendering Instead of Splitting

Another strategy to consider when dealing with a pair of 8s is surrendering instead of splitting. Surrendering is a move that allows you to forfeit your hand and receive half of your original bet back. So, surrendering can enable you to retain some of your money back in a case where you would have lost all of it were it not an option.

For example, if the dealer's upcard is an Ace and they are hitting on soft 17, and you're not allowed to double down after splitting, you should most likely surrender instead of splitting 8s.

However, It's important to note that surrendering is not always an option, and it's not available in all online casinos. Therefore, be sure to check the game's rules before making your decision or playing.

Additionally, there are different types of surrender options with different rules, so it's important to check the rules of the game so you can make well-informed decisions.

Remember that surrendering should only be considered a last resort if you're confident that your hand will lose.

In conclusion, splitting a pair of 8s in blackjack can be tricky, but with the right strategy and a bit of chance, it can potentially lead to big wins.

However, it's important to consider the situation, the cards on the table, and the game rules before making your decision.