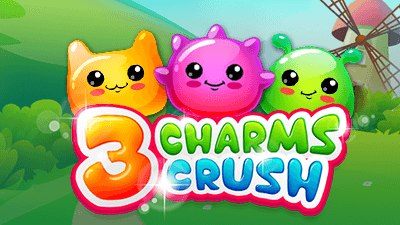 3 Charms Crush is a 5 reel, 5 payline iSoftBet slot with a cute cuddly theme. It’s the perfect online slot for any beginners who’ve been looking for a simple, but well rewarding casino slots online on Wizard Slots. You’ll get to enjoy payout boosts of up to 5x. Stakes in the game start from 5p to £5 a spin on all iOS and Android PC, mobile and tablet devices. If you are a fan of calming online slots then this one is definitely for you!

iSoftBet - the Developers of 3 Charms Crush

iSoftBet is an online casino software developer based in London. They’ve released a lot of branded titles and have acquired licenses from regulated jurisdictions all over the world. The exact history of the company is unclear. What is known is that they were initially listed as with an ISB with the earliest news releases about the company dating back to 2010. What is known for sure is that iSoftbet has produced a lot of games covering online slots, social casino, etc. They have released up to 400 games that cover mostly 5-reel slots, but also include popular branded film and TV series titles like Beverly Hills 90210, 24, and films like Platoon and Rambo. Some of the slot games they’ve released include; 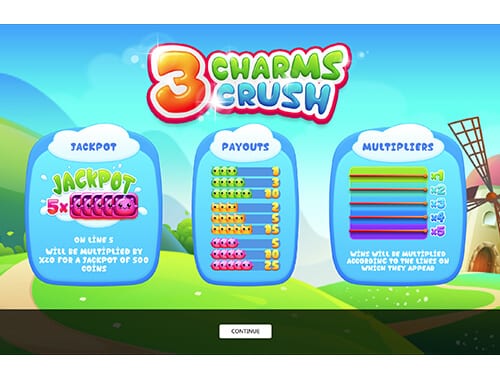 This is one of those great, charming slot games you should keep your eyes on!

There is a series of multiplier values that lies on the right side of the reels. They attach to a specific payline and can boost your payouts by 1x, 2x, 3x, 4x or even 5x multipliers. If you land a win on the 3rd payline, you will receive a payout of 1x your stake as well as a 3x boost. Your best scenario would be hit a 5 of a kind winning symbol combination that includes the pink creature symbol on the 5x line. If you manage that, you’ll encounter a super win that has multipliers of up to 20x applied to deliver wins of over 100x a stake.

The Verdict on 3 Charms Crush - Hit or Miss?

3 Charms Crush is one of the easiest and best slots to play on the Wizard Slots casino site. Players won’t get access to pick me rounds, free spins or any other bonus features they’re used to. All the action here takes place in base game thanks to the associated multipliers. This slot has a medium to low volatility with a steady stream of low-level wins coming in via the base game. The cutesy theme in 3 Charms Crush is also well executed and definitely draws you in. If you enjoy the Aegyo design and easy gameplay, then you will find a lot to enjoy here.

if you enjoyed this one why not try another one of our other slot games? how about Tuts Twister?